The United Kingdom is physically linked to two other countries. The Channel Tunnel connects the UK to France and Northern Ireland shares a land border with the Republic of Ireland. While the UK is a member of the European Union, it does not fully implement the Schengen Agreement, which means that travel to and from other EU countries (except Ireland) involves systematic passport / identity card checks at the border. Before departure remember to check with the requirements on the Gov.Uk’s website.

Due to an increase in airport security and aviation security in general, long delays are possible when checking in for a flight, particularly at Heathrow Airport in London. Additionally a passport or valid photo ID (such as photo driving licence, national ID card, etc.) is required for most internal flights. If you are travelling with younger children, keep these delays in mind.

When flying to the UK you are most likely to arrive at one of London’s five airports, although there are direct international flights to many other cities. Other major airports outside of the London area include Manchester Airport in the North of England,  Birmingham International, the UK’s seventh largest airport outside of London and Liverpool John Lennon Airport, in North West England.  Blackpool has an international airport nearby offering a lot of package-holiday flights and Newcastle International Airport is the only airport in the North East of England offering a daily service to and from Dubai, with connecting flights into Australia and the far east.  Smaller regional airports include Bristol, Southampton and Bournemouth Airports, Norwich, Durham Tees Valley, Newquay Cornwall Airport. In the South-east there is London Ashford Airport, also known as Lydd Airport has rather seasonal, limited services as does Oxford Airport. Kent International Airport is similarly small.

In Scotland, the major airports with links to London and abroad are, Edinburgh (Scotland’s busiest airport and the UK’s sixth), with a wide variety of European and North American routes, Glasgow has two airports: Glasgow International (for most major airlines) and Glasgow Prestwick (for Ryanair and some low-cost flights), Aberdeen, Inverness, Orkney and Shetland Isles’ airports.

Cardiff International, the only international airport in Wales, is a major hub of Flybe and Thomas Cook, which has a few long-haul flights, such as Barbados. Anglesey Airport is the only other noteworthy airport of Wales, which has one flight a day to the Isle of Man and Cardiff.

Isle of Man, Guernsey and Jersey all have their own respective airports, with well-serviced flights from around the UK, as well as to France and further afield. Flying is probably more convenient than ferry to these islands.

From Belgium and France, the Eurostar high-speed trains run between London (St Pancras International), Ebbsfleet and Ashford through the Channel Tunnel to Paris (Gare du Nord), Lille (Europe), Calais (Fréthun) and Brussels (Zuid-Midi). During the summer an additional weekly train operates to Avignon and during the winter a weekly service runs a ski service direct to the French Alps. Through tickets and connections are available through Lille, Paris and Brussels from many European cities to most large UK cities.

From The Netherlands there are Multiple daily connections from Dutch cities are possible via Brussels and the Eurostar to London.

The Channel Tunnel has provided a rail/road connection since 1994. Shuttle trains operated by Eurotunnel carry cars from Calais, France to Folkestone, the journey taking around 40 minutes. Fares start at £49 one way and can be booked on the Eurotunnel website. On arrival at Folkestone, you can drive on to the M20 motorway which heads towards London. Passengers travelling from France to the UK undergo UK passport/identity card and customs checks in Coquelles after the French exit checks before departure, rather than on arrival in the UK.

Car ferries also operate to many parts of the UK from other European countries – see the ‘by boat’ section below.

Drivers entering Northern Ireland from the Republic of Ireland will usually find they have done so without noticing. There are no border controls, and only the major roads will display signs stating that you are leaving one country and entering the other. However, the appropriate travel documents for your nationality are still required for cross-border travel despite the lack of border controls and you are liable under the laws of the country you are attempting to enter.

Coaches are the cheapest way to travel to the UK from France and the Benelux. Eurolines offer daily services from Paris, Amsterdam and Brussels to London Victoria coach station. Daily overnight coaches and limited day coaches travel between the UK and Ireland. Eurolines will also take you to/from other major European cities.

Dover is one of Britain’s most popular passenger ports with sailings from Calais and Dunkirk in France. Th The ferry between Dover and Calais costs around £80 for a car, however, there are  large discounts if you book early. Passengers travelling from Calais or Dunkirk by ferry to the UK go through UK passport/identity card checks after French exit checks before boarding, and UK customs checks on arrival in the UK.

On the south coast, Portsmouth serves ferries from Le Havre, Caen, Cherbourg, St. Malo and Bilbao in Spain and there are speedy services between Dieppe and Newhaven. The other route from Spain is Santander to Plymouth, Plymouth also has ferries from Roscoff, Poole has ferries to Cherbourg as well as the Channel Islands.

From the Republic of Ireland, ports of entry include Pembroke, Fishguard and Holyhead and Swansea. There are sailings from Dublin to Holyhead, and Liverpool. 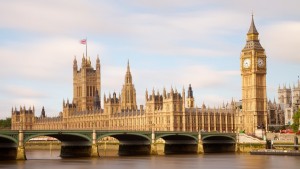 Information for parents and those traveling to the UK with a baby or toddler.

Travel to London with Babies, Toddlers or Kids Under 4