Seville is bursting with family friendly activities. Here are Kinder Travel Guide’s recommendations for things to do with kids under 5…

The Cathedral and Giralda 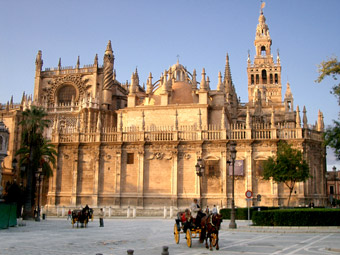 Seville’s Cathedral is pretty impressive and is the third largest Gothic style church in the world, combining both Moorish and Christian architecture. The Giralda (tower) was once the minaret for the mosque that was on the same site. Kids will be interested in knowing that the ramps inside the tower used to climb to the top were made so that back when it was a mosque, someone could ride a horse up to the top and ring the bell as a call to prayer. The climb is not for the faint at heart but energetic kids and older toddlers will manage. Once at the top you will get a birds eye view of the city. Inside the cathedral, you will find the mausoleum of Christopher Columbus. Some question whether Columbus is actually buried there but older kids will be interested none the less.

You will find the Real Alcázar next to the Cathedral in the historical centre of Seville. The property was the royal residence and has stunning gardens with a Moorish design and peacocks roaming free. There are also fountains, flowering plants and trees and areas where toddlers can stretch their legs.  Inside the palace, you can tour the apartments and see ornate tapestries and colourful Spanish tile work. Book your tickets in advance to avoid the queues and bring a baby carrier if you will be touring the apartments.

Stroll Around the Barrio Santa Cruz

After visiting the Cathedral and Real Alcazar a stroll through the Barrio Santa Cruz is the perfect activity. This is the Jewish district in this historic city and is filled with narrow streets, small shops and boutiques and cafes. 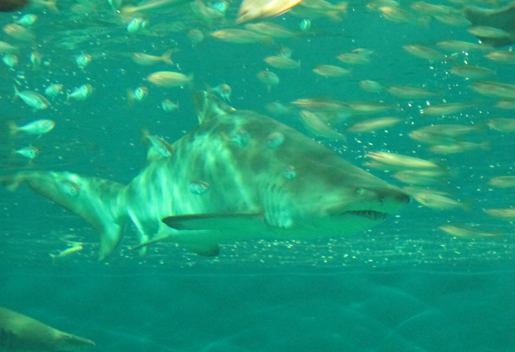 Seville aquarium offers the visitors a tour through 35 displays that allow them to learn about the flora and fauna in the area. With more than 3,000 cubic meters of water, over 400 marine species and more than 7,000 specimens, the Aquarium is a fantastic spot for young children. The visitor’s own journey follows a 700 metre path and it lasts about an hour and a half. The main attraction is one of the biggest tanks of sharks in Europe, which contains two million litres of water and a 9 metre deep cascade. The aquarium is stroller friendly and is open year round.

The Isla Mágica culturally themed amusement Park, is located a short distance from the city centre and has water slides, roller coasters and theatrical shows is another option for a full day of activities. You can get here on the hop on hop off bus service which is stroller accessible. Here you can explore a Spanish galleon, ride the train to Potosi, as well watch family friendly shows suitable for kids of all ages.

Parks and outdoor areas include the Jardín Americano, Sevilla’s botanical gardens, and the Alamillo Park, which has a bike rental service and plenty of space for outdoor activities.  In Maria Luisa Park, you can rent pedal quads for a great way to see all that this beautiful park has to offer. It is the largest in Seville, and is the perfect place for children to run around after exploring the city. Kids can feed the white pigeons, play on the climbing structures at the playground, go on a carriage or enjoy exploring among the green plants and trees. It is beautiful in the spring and early summer, as there is a lot of shade and it almost resembles a jungle. 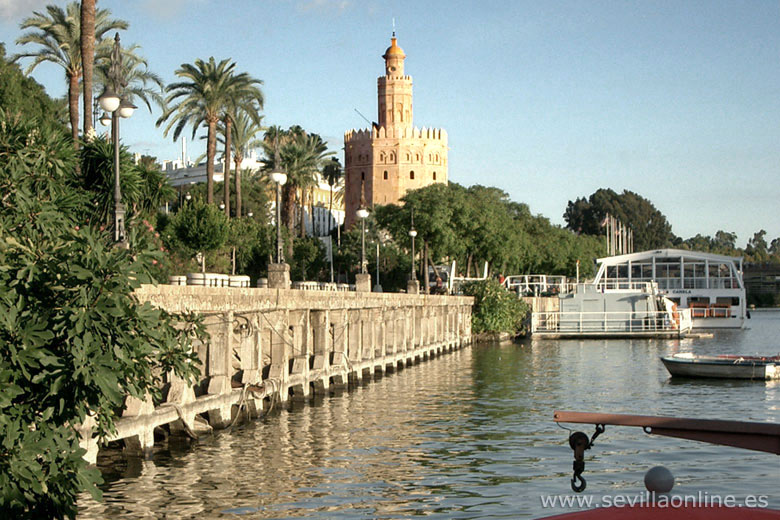 A boat trip on the Guadalquivir River is definitely worth doing and you can embark right by the Bull Fighting Ring (Torre del Oro).  The trip offers spectacular views of the city and provides a great opportunity for taking photographs.

Head to La Campana for a traditional pastry shop experience. Seville also has some delicious ice cream shops and kids will love churros, the traditional Spanish donuts which are dipped in hot chocolate.

The Museo de Bellas Artes displays artworks by Francisco de Zurbaran, Juan de Valdes Leal, and Bartolome Esteban Murillo,  El Greco and Goya. Sprawling altarpieces fit beautifully into the museum’s soaring spaces and cupola. In the Archaoelogical Museum, designed for the 1929 Ibero-American Exhibition, you will find treasures from the 15th century and earlier along with examples of Roman marble statuary, tombs, funerary urns, and the Treasure of El Carambolo, a collection of gold armor and assorted pieces dating from the 7th and 8th centuries.

The high speed train makes nearby Cordoba a fantastic day trip. The main attraction is the Great Mosque of Cordoba (la Mezquita), which is now a Roman Catholic cathedral. It’s easily one of the most spectacular buildings that you will see in Spain with colorful horseshoe-shaped arches and columns of jasper, onyx, and marble. The city’s other sights include bell towers, orange groves, and a honey-combed dome. 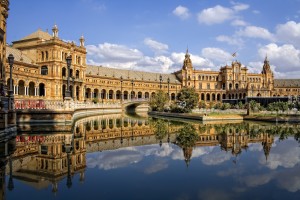