The city starts at the water’s edge with a pretty promenade along the Mediterranean and a marina full of colorful boats and their international flags. The focal point of the historic center is the Piazza del Duomo, in front of the striking cathedral. The piazza is filled with cafes and elegant shops, but there are sixty steps leading to the church to visit the Byzantine style structure that bears Moorish-influenced arches and decoration so bear this in mind if you have a stroller. Dedicated to St. Andrew, the Duomo di Sant’Andrea is a truly beautiful structure. Inside is the hidden Cloister of Paradise, dating to 1266, with a forest of columns, Arabesque arches and an amazing fresco. The crypt is highly decorated and worth a visit, too. The Marina Grande Beach is is in the town (although there are plenty of other beaches nearby). This beach reaches very high levels of overcrowding on the weekends of July and August. The beach is well served by several beach resorts and restaurants. You’ll be able to rent sun-loungers and parasols.

You can take day trips to Capri from most of the towns on the Amalfi Coast or you could also opt to stay in one of the islands many hotels. Capri has plenty of supermarkets and pharmacies which will stock nappies, wipes and everything else you will need for babies and toddlers. The island is famous for its rugged landscape, upscale beach resorts and high-end shops selling handmade leather sandals and signature limoncello liqueur. One of its best-known natural sites is the Blue Grotto, a dark cavern where the sea glows electric blue, the result of sunlight passing through an underwater cave. A boat trip to see the Blue Grotto is well worth it if you have a toddler that will sit still!

The Island of Capri is mostly pedestrian, which makes it the perfect place to walk with children. The historic center of Capri town and the areas surrounding the Piazzetta are closed to traffic. The historic center of Anacapri is pedestrian, as well. There is a small playground in Capri in the Giardini della Flora Capensis park. The park is located in the center of town, on a side street near the Hotel La Palma. In Anacapri, the playground is on Via G.Orlandi.

The beaches in Capri are rocky or set beneath cliffs and the water gets quite deep already 2 or 3 meters from the shore, so make sure you have swim safety devices with you. The Marina Grande Beach is the largest beach on the island and most of the beach is free and the most suitable stretch for children is the scogliera, where a natural breakwater protects from the largest waves. At high tide, a tide pool forms here with trapped seawater about 30 centimeters deep. There is a restaurant on the beach also. Other beaches include Marina Piccola Beach, a small and often crowded beach with a number of restaurants and cafes and Bagni di Tiberio which you can reach this beach by boat or on foot (but keep in mind that it’s a long walk). The free beach is protected by a breakwater, so perfect for little ones. 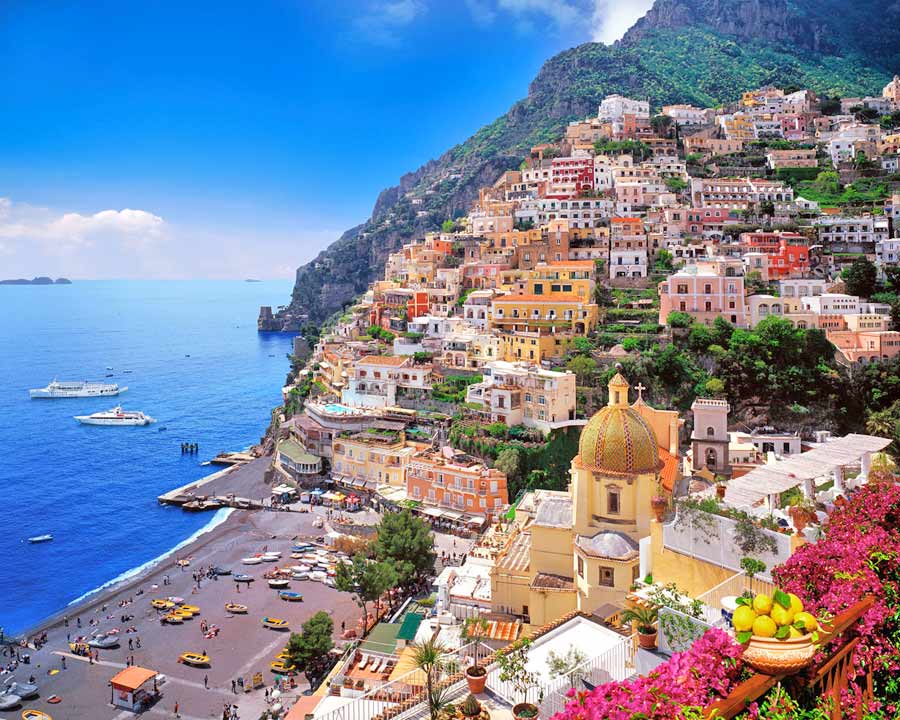 Cetara is a pretty fishing town with a busy fishing port, built at the feet of the slopes of Mount Falesio.The entire economy of the village revolves around its maritime traditions. The fleet of Cetara is one of the most active of the Mediterranean Sea, specialized in fishing, processing and preserving tuna and anchovies. Just one bend before reaching Cetara, the seaside hamlet of Erchie is a little gem which, legend has it, was founded by Hercules when he arrived in Italy from Greece. An ancient Norman tower dominates the seafront and divides it into two pretty little beaches.

This fantastic beach town is just a short bus ride from Amalfi, is relatively flat – especially it’s promenade along the water, and would be relatively accessible with a car. Maiori has the longest beach of all those on the Amalfi Coast: almost a kilometer of sand with a dozen or so bathing establishments and a level waterfront completely different from that of all the other beaches on the Amalfi Coast.

Having been spared the floods of 1954, Minori has conserved all the characteristics of the area’s traditional coastal villages; namely, a maze of little lanes and squares, sloping down towards the beach and seafront promenade.

The city of Naples is famous for pizza, coffee and gelato and there is no shortage of fantastic eateries here. The city is oftentimes referred to as the world’s largest open-air museum in that there is an abundance of historical structures, monuments, opera houses, and theaters. There are a number of toddler friendly activities in the city also including:

The Naples’ Aquarium, the oldest European structure of its kind and was founded in the late 1800’s by a naturalist from Germany. The aquarium is open during the months of October through April. Hours of operation are Tuesday through Saturday from 9:00 a.m. until 5:00 p.m., and on Sundays from 09:00 a.m. until 2:00 p.m.

This Naples Museum features old fashioned cars, engines, and railway equipment, displayed in a restored format of railway atmosphere. The structure is located east of the city center of Naples and was originally created by the 19th century Bourbon rulers. The museum is open Mondays through Saturdays from 09:00 a.m. until 2:00 p.m.

The science museum or Città della Scienza (City of Science) is also worth a visit, which is still recovering from an arson attack that took place last March 2013. Aside from paying the entrance fee, you can also ask the museum personnel about giving donations for the rebuilding of the place. While the main science center is still being built, this museum along Via Coroglio is currently hosting a handful of small exhibits, including a planetarium, an educational garden, a volcanoes exhibit, and an agricultural exhibit.

The Campi Flegrei lies West of Naples, and is known to geologists as one of the few supervolcanoes in the world, which means it can erupt thousands of times greater than ordinary volcanoes. Campi Flegrei offers a fascinating and unique experience for families. Solfatara, one of its 24 craters, is a dormant volcanic crater covered by a congealed lava cap. The activity underneath has turned the landscape into a steaming and bubbling terrain unlike any other. Schoolchildren usually go here to learn about geology and to see the earth in action.

Castel Nuovo, otherwise known as Maschio Angioino (Angevin stronghold), is Naples’ foremost architectural symbol. The castle’s most prominent exterior element is the impressive triumphal arch, which stands between its two western towers. The castle looks like something from a medieval fairytale which older toddlers will enjoy!

Napoli Sotterranea is spread out below the entire historic center of Naples, this vast underground city features early Christian burial sites, Roman roads and aqueducts, ancient markets, and air-raid shelters dating back to the Second World War. If you are visiting here with younger toddlers or babies, remember to bring a sling or fold away stroller.

The ancient town of Pompeii is famous for its destruction by the volcano which erupted and destroyed it in 79AD.

The city was preserved and you can really see how the Romans lived on a visit here. There are preserved buildings and murals and you can even see food and people that were preserved in the molten lava for 2000 years.

Pompeii is located near Naples and is well worth a visit however, in order to see the place you will need 2 – 3 hours and although it is mostly flat there are rocky pathways and a lot of door lips and steps so a baby carrier or lightweight stroller is a must have. You will need to think about whether your child will be able to take the trip and remember that during the summer Pompeii is extremely dry and hot.

The Virtual Pompeii exhibition, is located along Via Plinio, near the Pompeii ruins. This educational entertainment center features a 3D projection room that allows older kids to check out a virtual reconstruction of the ancient town before the volcano erupted.

Positano is a stunning town and probably the most popular town on the coast for tourists. It is built into the hills and offers fantastic sea food and many dishes with a lemon base. If you are staying in Positano, try to stay close to the beach. The small public beach is rocky so make sure to bring shoes for little ones if they will be playing. If you are using the public beach you will need to bring chairs and towels but if you don’t want to carry them up the stairs, you can also rent chairs and towels at the beach club. If possible, try to get a hotel with a pool if you are basing yourself here.

A great day out with babies and toddlers is to the town of Ravello, in the hills near to Amalfi. This has a number of flat areas for kids to run around and maneuvering with a stroller is easier here than in some of the other hillier towns. 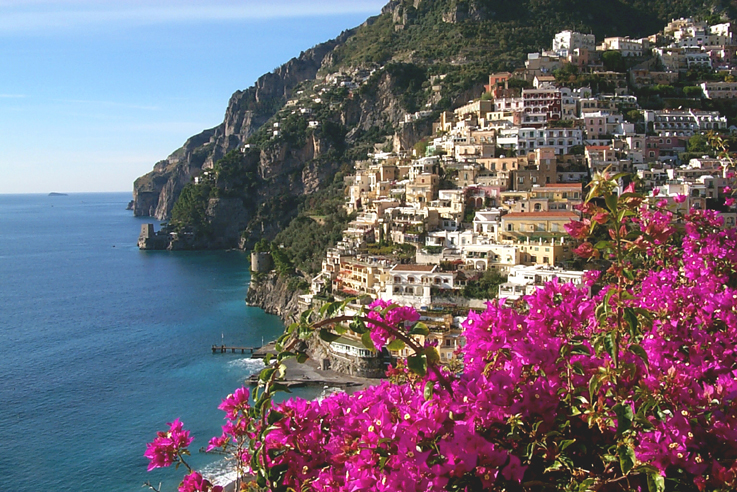 Sorrento is another option although again, the town is on top of a hill and although you can explore the hilltop area easily with a stroller you may find it difficult to walk anywhere downhill with a stroller as there are steep slopes and steps.There are at least 3 children’s playgrounds in Sorrento, two of them just off Corsa Italia in the town centre.The beaches are mostly pebbly or rocky and most people use the bathing platforms to sunbathe and swim but you must pay a fee for these. The town is filled with cobblestone streets, colourful flowers and picture-perfect views of Mount Vesuvius and Naples. Parts of the town are hilly but it is not as steep and step-filled as Positano. Swimming Sorrento-style is via wooden or stone bathing platforms beneath the cliffs, not ideal for toddlers so you may need to travel to find a more child friendly beach or you could also opt to stay in a hotel with a nice pool if you decide to base yourself in Sorrento. 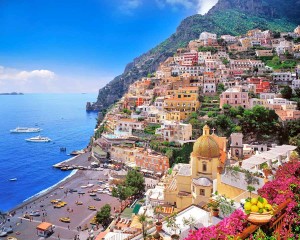 Family Holidays on the Amalfi Coast with Babies, Toddlers and Kids