If you are travelling to Rome with a baby or a toddler, a taxi is by far the easiest way to travel to your hotel from the airport. You can find taxis at the arrivals sections of both Rome’s airports however, if you have nit brought your car seat, it is safer to prebook a taxi with one to ensure availability. You can pre-book one from Rome Airport Taxi Services.

Taxis in Rome are white. There is a flat fare of €48 from Fiumicino airport to downtown Rome (the area within the city’s Aurelian Walls) and vice versa.

From the airport at Ciampino, the flat fare is €30. There should be an organised taxi queue – however, the drivers will often negotiate amongst themselves if you are going somewhere the cab at the front doesn’t want to go to.

A shared airport shuttle can be hired for around €15 per person to take you from Ciampino airport. However, since the shuttle is shared, it may take longer to reach your destination if other customers are dropped off before you are.

Rental cars are available from all major companies at both airports. Providers can be reached easily in the arrivals halls at both Fiumicino and Ciampino.

Another option, is to book a licenced limousine in advance on-line. The prices are often cheaper than a taxi especially for minivans and in Fiumicino even for sedans. One disadvantage however is that you normally need to book at least 24 hours in advance so you need to plan ahead.

The Leonardo Express leaves every 30 minutes to Roma Termini, Rome’s central train station (35 min trip). Tickets cost €14 and are available (within 7 days of departure) online (you must create an account and enroll in Trenitalia’s Cartafreccia program before you can purchase online tickets). Tickets sold at the departure platform are €15.

An inexpensive choice from Fiumicino is to take the bus (COTRAL) to the “EUR Magliana” stop, which belongs to line B, and then take the Metro. It’s the cheapest way to get to the centre (€2.50 bus + €1.50 Metro). The sign on this bus reads “Fiumicino-Porto-Magliana”.

The Terravision bus is probably the easiest and cheapest connection between Fiumicino airport and Rome city centre, but the journey takes 55 minutes. However, you should consider that they oversell buses online and you may to wait more than two hours to catch one. The online “reservation” does not guarantee a seat. You can either book online (€4 one-way) or buy the tickets there (€6 one-way, €11 round-trip). The bus departs near Terminal 3 of the airport and arrives at Termini station (the same applies for the route in reverse).

COTRAL/Schiaffini operates buses from both airports to the city; don’t forget to validate your ticket after getting on the bus.

From Leonardo da Vinci/Fiumicino, the public bus stop is located outdoors at ground level, at the bottom of the Terminal 1 (Domestic Arrivals). You can buy tickets at the tobacco shop in the Terminal 1 baggage area, with the blue sign (Tabaccheria).

From Ciampino airport the cheapest way is a combination of bus and train. For the first part you can take the Atral/Schiaffini bus(roughly every hour or 30 minutes on weekdays) from the stop located outside the terminal building to either Ciampino train station (5min) or to the Metro line A Anagnina stop (10min or more) for a cost of €1.20 to either way. From the Ciampino train station you can take the train to Termini station (20min) for €1.50. Because Ciampino is the first or second train stop on the way to many destinations from Termini, there are around 5 trains per hour and this is probably the overall fastest way (if you are going from Termini to Ciampino by train, you can enter “Ciampino” in the automated ticket machines and it will offer the different destinations/times). From Anagnina Metro station the ticket costs €1.50 (good for any public transport for 100 minutes, see single-ride ticket) and this should be the best way if your destination is near a Metro line.

There are a few direct bus services from Ciampino, all of which arrive at Termini station in downtown Rome including Sit Bus Shuttle, Terravision and COTRAL. 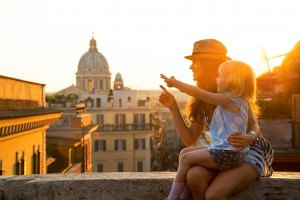 Family Holidays to Rome with Babies, Toddlers and Kids