Munich International Airport is the second busiest airport in Germany and is located 30 km (18 mi) north-east of Munich, close to the city Freising.

to keep the little ones occupies while you re-group before or after boarding your flight.

The best way for you and your family to get to central Munich is to get the S-bahn. Tickets can be purchased easily from kiosks at the terminal. Single €10.50 or return €13.00. The train departs every 10 minutes and is fully stroller accessible.

There is also a bus service from the airport to the Hauptbahnhof for the same price but this service is less accessible. Strollers would need to be stowed away underneath the bus and there is only adult seat belts on board.

Memmingen Airport is located around 110 km (70 mi) to the west of Munich. Nevertheless, it is marketed as “Munich West” by Ryanair. There are shuttle buses connecting the airport with Munich with timetables aligned to Ryanair’s flight schedule. One way tickets are €20 or €15 if pre-booked via Internet. The buses arrive at and leave from Munich’s Central Bus Station at Hackerbrücke, which is located next to Munich Central Station. Be aware that the bus ride from Memmingen Airport to Munich takes about 1 hr 25 min.

Getting to Munich from the Airport

By Train – Munich Central Station (Hauptbahnhof) is conveniently located in the centre of Munich. The main station is west of Marienplatz (two S-Bahn stations) and only a short walk away from the city centre. It is well connected to Munich’s dense public transport network. The main station has a traveler-friendly infrastructure including several restaurants, shops, a supermarket (that is open on Sundays, too), a tourist bureau, and a Deutsche Bahn ticket and travel agency office.The station is stroller friendly. Deutsche Bahn uses Munich as one of its main German hubs and offers regional and long-distance connections to many German cities including Stuttgart, Nuremberg, Berlin, Frankfurt, Cologne and Hanover. Munich has also a high-speed TGV-connection with Paris and Strasbourg as well as Eurocity and CityNightLine (night train) connections with Amsterdam, Budapest, Vienna, Zurich and other international cities.

Two additional railway stations are located in the west (Munich Pasing) and the east (Munich East) of Munich. Both stations are connected to the public transport system and serve as transport hubs for Deutsche Bahn’s regional and long-distance trains.

By Car – Munich is well connected with other cities in Germany and Austria by the German autobahn network. Traffic in Munich can be a challenge at peak times. Make sure you pre book a car seat to ensure availability (these can be very expensive in Germany so shop around) if you are not bringing your own with you. The Autobahn in Germany is fantastic for driving and is very safe. There are many rest stops along the Autobahn also with baby changing facilities and a selection of foods. Many of these also have indoor and outdoor play areas that are ideal in letting your children run around for a while

By Bus – An inexpensive and surprisingly comfortable possibility to travel to Munich are long-haul buses. However, this will be difficult if your child is crawling or walking as they will not be able to move around. In such cases, a car or train would be preferable. 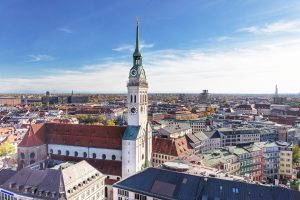