A large number of regional, national and international companies offer daily services in and out of the airports of Aquitaine.

Paris is less than one hour away and the major European cities under 2 hours away by air. There are a number of airports in Aquitaine including:

By Car – You can rent a car at any of the region’s airports, alternatively, take the TGV train from Paris to either Libourne or Bordeaux (about 3hrs), then pick up a hire-car. From the ferry port of Caen in Normandy, it’s about a 7hr drive to Bergerac, which you could easy break at Poitiers in the Poitou Charentes.

By Train – There are full rail links backed up by the T.G.V. Atlantique high-speed train which makes Aquitaine a major communications hub. Paris is just 3 hours from Bordeaux, Nantes 4 hours, Lille 5 hours and Brussels 6 hours.Trains arrive into Bordeaux from the Gare St-Jean train station which is located approximately a half hour’s walk away from the center of Bordeaux or a few minutes by tram.

By Sea – The ports of Bordeaux and Bayonne offer cruise ships the possibility of mooring right in the city centre. 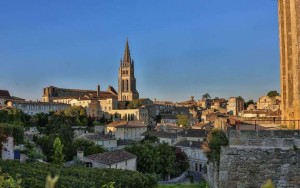 Bordeaux and Aquitaine With a Baby, Toddler or Young Child.

Just to the south of Biarritz, St-Jean-de-Luz is a picturesque fishing port that’s worth…

Pyrénées-Atlantiques, the westernmost section of the mountain range divided between…

This area is inland and very rural, offering laid-back country living free of the high…

Landes, a coastal region of wild sands and large expanses of forest, with only a few towns

You can paddle and swim in the Dordogne river itself, especially at Limeuil, where there…

Nestled on the south Atlantic coast of France, Bordeaux is one of the most important wine…

Arcachon and its 3km-long sand dune, Dune du Pyla. Other than the dune, plus 7km of fine…