Each time you enter Singapore you will need to fill an immigration card.

Carefully keep it after immigration clearance, for you have to return it when you exit. If you plan to visit nearby Malaysia or Indonesia, you have to repeat this process for each time you exit and re-enter. Most nationalities can enter Singapore without a visa. Refer to the Immigration and Checkpoints Authority website for current guidelines.

Bring prescriptions for any medicines you may have with you, and obtain prior permission from the Health Sciences Authority before bringing in any sedatives (eg Valium/diazepam) or strong painkillers (eg codeine). There is a mandatory death sentence for anyone caught bringing illegal drugs into Singapore so ensure that you have all the paperwork that you need to prove that the drugs that you have, have been prescribed. Malaysia is similarly strict.

Singapore is one of Southeast Asia’s largest aviation hubs, so unless you’re coming from Peninsular Malaysia or Batam/Bintan in Indonesia, the easiest way to enter Singapore is by air. In addition to flag-carrier Singapore Airlines and its regional subsidiary SilkAir, Singapore is also home to low-cost carriers Tiger Airways, ‘Jetstar Asia and Scoot.


In addition to the locals, every carrier of any size in Asia offers flights to Singapore, with pan-Asian discount carrier AirAsia and Malaysian regional operator Firefly operating dense networks from Singapore. There are also direct services to Europe, the Middle East, Australia, New Zealand, North America, and South Africa. Singapore is particularly popular on the “Kangaroo Route” between Australia and Europe, with airlines like KLM, British Airways, Etihad Airways and Emirates using Singapore as the stopover point.

All of Changi Airport’s Terminals have restaurants with high chairs and baby changing facilities. There are ‘Baby Care Rooms’ with nappy change facilities and hot filtered water in a huge number of locations throughout the airport. There are a number of play areas in the airport suitable for kids aged from 1 to 12. Play areas are located at:

Terminal 2 has an indoor garden, a music listening area with couches and mood lighting, a computer gaming room, a small movie theatre, paid massage services, and of course plenty of duty-free shops. Terminal 3 has a butterfly garden and plenty of natural light, but fewer entertainment options. Terminal 1 has a swimming pool for $13.91 and jacuzzi, both open until 23:00. You can travel between the main terminals without passing through immigration and, if you have no checked-in luggage to collect, you can clear passport control and customs at any terminal.

In all terminals, internet access is provided free of charge, both wirelessly and via some 200 terminals and kiosks, there are some Xbox systems set up to keep gamers entertained, and there’s live lounge music at times.  Food options are varied and generally reasonably priced, with some choice picks.

If you are stopping over and have over 5  hours to spare there are  city tours five times a day departing from the airport.

From the airport there are a number of ways to get into the city. The Ground Transport Desk, is a 24-hour counter located in the Arrival Hall of each terminal. It offers flat fee transport options to any destination in Singapore, which is a pretty good deal especially when the taxi queue is long or after midnight(beat the queue, skip the surcharge). Simply visit the Ground Transport Desk located at the arrival hall of each terminal to book. Options include and Airport Shuttle, a 4 or 7 seater vehicle or a limousine.

Taxis- follow the signs after clearing customs. Meters are always used in Singapore and prices are reasonable. A trip to the city during the day will be between $20-30 including $3-5 airport surcharge. An additional 50% surcharge applies between midnight and 06:00. Pre book a taxi with a car seat if you are not bringing your own from Singapore Airport Transfer.

Subway – MRT trains run from a station between T2 and T3, but you’ll need to change trains at Tanah Merah to a city-bound train: just exit through the left hand side door and cross the platform. The 30min ride to City Hall station costs $1.90 plus a refundable $1 deposit, and trains run 05:31-23:18. Trains from Tanah Merah to the city tend to be very crowded during peak hours, and it is unlikely to have seats.

By Car – Driving in Singapore is on the left. Make sure you pre book a car with a car seat to ensure availability and check the car seat for damage before setting off. Singapore is linked by two land crossings to Peninsular Malaysia.  Driving into Singapore with a foreign-registered car is rather complicated and expensive; see the Land Transport Authority’s Driving Into & Out of Singapore guide for the administrative details. Peninsular Malaysia-registered cars need to show that they have valid road tax and Malaysian insurance coverage. Go through immigration first and get your passport stamped. Then follow the Red Lane to buy the AutoPass ($10) from the LTA office. At the parking area, an LTA officer will verify your car, road tax and insurance cover note and issue you a small chit of paper which you take to the LTA counter to buy your AutoPass and rent an In-vehicle Unit (IU) for road pricing charges (or opt to pay a flat $5/day fee instead). Once that is done, proceed to customs where you will have to open the boot for inspection. After that, you are free to go anywhere in Singapore. Driving into Malaysia from Singapore is relatively uncomplicated, although small tolls are charged for both crossing and (for the Second Link) the adjoining expressway. In both directions, car hire agencies often prohibit their vehicles from crossing the border or charge extra.


By Bus – There are buses to/from Kuala Lumpur (KL) and many other destinations in Malaysia through the Woodlands Checkpoint and the Second Link at Tuas. Unfortunately, there is no central bus terminal and different companies leave from all over the city. In general, the more you pay, the faster and more comfortable your trip. More expensive buses leave on time, use the Second Link, and don’t stop along the way; while the cheapest buses leave late if at all, use the perpetually jammed Causeway and make more stops.

By Train – If you decide to travel to Malaysia from Singapore with a baby or toddler, the train is the most comfortable way of doing so (unless you are travelling long distance, in which case a flight would be best). Keretapi Tanah Melayu (Malayan Railway or KTMB) operates a shuttle train service between Woodlands Train Checkpoint in Singapore and JB Sentral in Johor Bahru. While less frequent and more expensive than buses, and the Woodlands KTMB station is a bus ride away from the MRT system, the trains have dedicated immigration and custom checks areas separated from the very busy road checkpoints, and get you across the Causeway without getting stuck in traffic.

By Taxi – There is also the option of taking a taxi between Singapore and Johor Bahru. The main advantage is that you do not need to lug your stuff (or yourself) through Immigration and Customs at both ends; you can just sit in the car.

By Boat – Ferries link Singapore with the neighbouring Indonesian province of Riau Islands and the Malaysian state of Johor. This is a great option of you are travelling with a toddler as they will enjoy exploring the ferry and the novelty of sea travel. The journey times are not too long either. Singapore has five ferry terminals which handle international ferries. Star Cruises offers multi-day cruises from Singapore to points throughout Southeast Asia, departing from Harbour Front FT. Itineraries vary widely and change from year to year, but common destinations include Malacca, Klang (Kuala Lumpur), Penang, Langkawi, Redang and Tioman in Malaysia, as well as Phuket, Krabi, Ko Samui and Bangkok in Thailand. There are also several cruises every year to Borneo (Malaysia), Sihanoukville (Cambodia), Ho Chi Minh City (Vietnam) and even some 10 night long hauls to Hong Kong. Check with the company about baby changing and sleeping facilities, high chairs, food and entertainment onboard before booking. 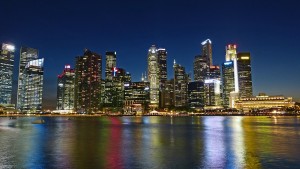